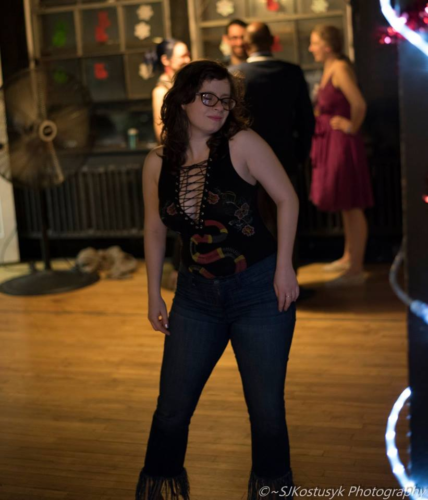 I am complacency’s victim as often as I am that of imposter syndrome. This means I contain two selves: the one that gets bored with a dance and thinks I know all its’ nuances and the one that doesn’t feel like I can call myself a dancer. I was reaching the point of amazement that anyone had let me get away with faking blues dancing as long as I had: I had less than a handful of classes under my belt, after all and operated mostly on instinct, when I was gifted with a BDNY scholarship sponsoring me to attend my first blues dance exchange.

Often, what serves to rekindle your love for something is being in the company of others who are passionate about it. Seeing the mass of support and respect for blues and other dancers at Snowbound Blues 2017 took my ego down a few notches and raised my interest another few. If I knew all there was about blues dancing, or enough to get by, then why did I not know that blues was such serious business in Canada? Why was the Triple Step Blues taught by the talented Kenneth Shipp so insanely difficult for me? Before Snowbound Blues, I had not understood the beauty of slow drag or been taught to do it correctly, a problem Laura Chieko soon put right, nor had I had enough confidence to lead.

It’s no secret that blues attracts a predominantly educated, nerdy, adventurous crowd, but it wasn’t until Snowbound Blues that I delved particularly into what blues dancing means for the individuals involved. In my own life, blues dancing began on the hardwood floors of a Washington Heights apartment and has come very naturally to me. For one local dancer at Snowbound Blues, his research on Huntington’s chorea had inspired his dance moves. I was particularly captivated by Forest Roger-Marcovitz’s “broken-ankle” dance during the Solo Blues competition, which he’d been building up a tolerance for for years; to me, the style was evocative of a broken-down spirit, of carrying on when life had literally torn you down. Ariane Proteau’s impassioned representation of femininity, blues, and wildness was breathtaking in the same competition and afterwards, at her group’s performance. On Sunday, I met a physical therapist doubling as a dancer who made it her personal goal to educate dancers on preventative exercises and techniques to avoid and treat injuries that naturally occur throughout one’s dancing career. With all the fantastically talented individuals I met, I had to wonder why my home base in New York did not have a blues dance troupe of its own.

As a child, I’ve always been guilty of dancing whenever there was music at an orchestral demonstration in Karlovy Vary, to smooth jazz on a Holland America cruise and I was always the odd man out. People admired my gumption, whereas I was just moving as the music moved me, amazed that nobody else was listening to the rhythm and groove in their bodies. During social dancing as an adult, I often get caught up in who is watching me and the perceived judgments I assume they are making; it was a breath of fresh air to be in the workshops offered at Snowbound. Everyone was there to learn, encourage, and support; mistakes were tolerated, questions encouraged, and I slowly settled back into my skin and oneness with the dance. Nobody was calling me out as an imposter, nobody was asking me what I thought I was doing here. One of the finest moments of Snowbound Blues for me personally was Doug Curry’s lecture, which was punctuated with examples of blues music; at these musical interjections, the people sitting in on his lecture would get up and invite each other to dance. Finally, I was a dancer. And finally, I was not alone.